Toggle sidebar Toggle sidebar
Menu
Install the app
You are using an out of date browser. It may not display this or other websites correctly.
You should upgrade or use an alternative browser.

Billie Eilish and the Changing Face of Pop - The New Yorker Billie Eilish and the Changing Face of Pop - The New Yorker
By Doreen St. Félix

While performing at Coachella, earlier this month, the singer-songwriter Billie Eilish forgot the words to her song “All Good Girls Go to Hell.” Eilish, who is only seventeen, didn’t seem especially bothered by the lapse. She exuded a cool girl’s sprezzatura, style as nonchalance. Mumbling a little, Eilish wheeled around the stage, like a spinning top about to give out, and then hiked up her shorts, which, baggy and long, were messing with her torque. “Fuck,” she said, turning her back and her mood-ring-gray hair to the audience, “What the fuck are the words, though?” The mistake was so charming that it did not seem like a mistake at all. The audience yelped and the Internet squealed. “I love this,” one YouTube commenter said, below a clip of the performance. “She made it sound like it...
Continue…

Billie Eilish, 17, wears a baggy grey hoodie as she jets into Sydney for her Australian tour... - Daily Mail 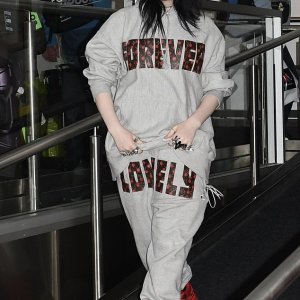 Billie Eilish, 17, wears a baggy grey hoodie as she jets into Sydney for her Australian tour - after forgetting the lyrics to her own song at Coachella - Daily Mail

The 17-year-old, who is the first artist born in the 2000s to land a No. 1 album, looked in relaxed spirits as she flew into Sydney Airport on Thursday.

She dressed casually in a baggy grey hoodie and matching trackpants while signing autographs for fans at the arrivals terminal.

Billie went makeup free for the flight, and accessorised with several chunky rings and a pair of bright red sneakers. Unless you live under a rock—I mean, it’d have to be a giant boulder—the name Billie Eilish probably rings a bell. She’s the enigmatic 17-year-old performer who is currently taking the pop world by storm. Currently, there isn’t a talk show, playlist, or music festival that she hasn’t been a part of. And Eilish’s edgy, anti-pop aesthetic is hard to miss: her signature blue-gray hair, eye-popping streetwear, and mounds of silver necklaces are intimidatingly cool—and delightfully weird.
Continue…

billie is on the cover of Numéro art, full issue out on April 29th - @eilishupdates2 / Twitter 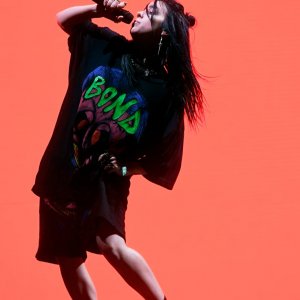 Billie Eilish is undoubtedly a boss after having taken over the music scene as quickly as she did and securing a slot at this year's Coachella.

And while some would use their downtime to relax and unwind, according to hairstylist Joseph Chase, the grind didn't stop for Eilish. While she was getting her hair styled, she "mostly worked and had meetings with her team about upcoming shows and travel schedule," he said. "She's a very busy girl."

Billie Eilish slams trolls who don't get her jokes - Tucson.com

Billie Eilish got rid of Twitter because she got fed up with trolls who couldn't handle her jokes.

The 'My Strange Addiction' singer has opened up about how she was once branded "crazy and toxic" for making a quip on the social media site, and how it's impossible to say something "horrible" in a tongue-in-cheek way without someone getting "offended" these days.

According to the Daily Star newspaper, she said: "The internet has been saying some dumb s***, not I'm like: 'I'm keeping this to myself as you don't deserve my funny a**.'

"I make one joke and it's like, 'She's crazy, she's toxic, a horrible person, rot in hell, you're problematic' - damn I made a joke, it's just funny, calm down.

"I literally deleted Twitter because of that. I made the funniest...
Interview
Continue…